In the XIX to the beginning of the XX century jewellery production was spread throughout all trade and craft centres of Karakalpakstan. Every large village had its own jeweller. Karakalpak jewellers used silver, gold, bronze, symbolic carnelian and turquoise stones, corals as well as the claws and teeth of predatory birds and animals for decoration.

Karakalpak jewellery art was characterised by monumentality and symmetry of shapes as well as expressive rounded contours. Craftsmen mainly produced jewellery for the amulets of women and children. Products for men included rings, various belt jewelers and buckles, weapon fragments, and riding equipment. At the same time all jewellery products acted as happiness talismans and amulets against malign forces.

Karakalpak ornamental shapes originated from ancient times, namely the Scythian period. They depicted stylized religious symbols and totems. Many of these ornaments are not found in other cultures, and included pendants (shar-tuyme), anshik, and temple amulets (kiran) with a “scene of an eagle’s attack on a wild ram”, among others.

Moreover, craftsmen produced large breast pendants for young girls: zhumalak-tuyme (hollow egg-shaped jewels with a belt pattern called “snake trail”); baka-tuyme (stylized frog figurines); and shar-tuyme (the symbol of the Sun and Fire in a form of a cross). A “ringing” maidenly belt decoration, ongirmonshak, was endowed with the ability to ward off malign spirits. Its shape resembled a dome, while a chain row with diamonds and jingling balls goza (walnut) went through its base.

Temporal maidenly earrings (silsineli-sirga) were connected under the chin by a chain with diamond-shaped pendants. This chain was taken off during the wedding ritual of a bride’s dressing. After that the earrings were called soyau-sirga (a stem without leaves).

The massive breast jewelleries of Karakalpak women (khaikel) had hornlike finials associated with images of the curled-up horns of a bull and the curled-down horns of sheep. The name khaikel (idol, monument) dates back to the ancestors’ cult and totemism. The horns of a strong bull and fecund ram (the symbols of “lunar bull” and “solar sheep”) were endowed with protecting properties. Other types of Karakalpak jewellery include the image of a fortress wall (a shelter symbol) and a flowering trefoil shrub (a symbol of Umay, a patroness of pregnant women and children). The centre of the jewellery was occupied by an amulet – a hollow case, which in ancient times contained a needle (a remedy against the malign forces). After the adoption of Islam the needle was substituted with a written prayer. Khaikel was considered the main decoration of the bride’s dowry. She wore it as an amulet during her entire childbearing years.

A piece of bronze jewellery anshik (mother) was a symbol of an ancient fertility goddess. It was presented to the bride as a female fertility talisman. Its decoration schematically depicted a female figure and her womb. Moreover, anshik contained ancient totem depictions – opposing figures of birds or sheep and wolves heads. They ensured the protection of a woman’s reproductive forces day and night. This decoration preserved an ancient idea of the interference of two worlds – the world of people and the spiritual world. 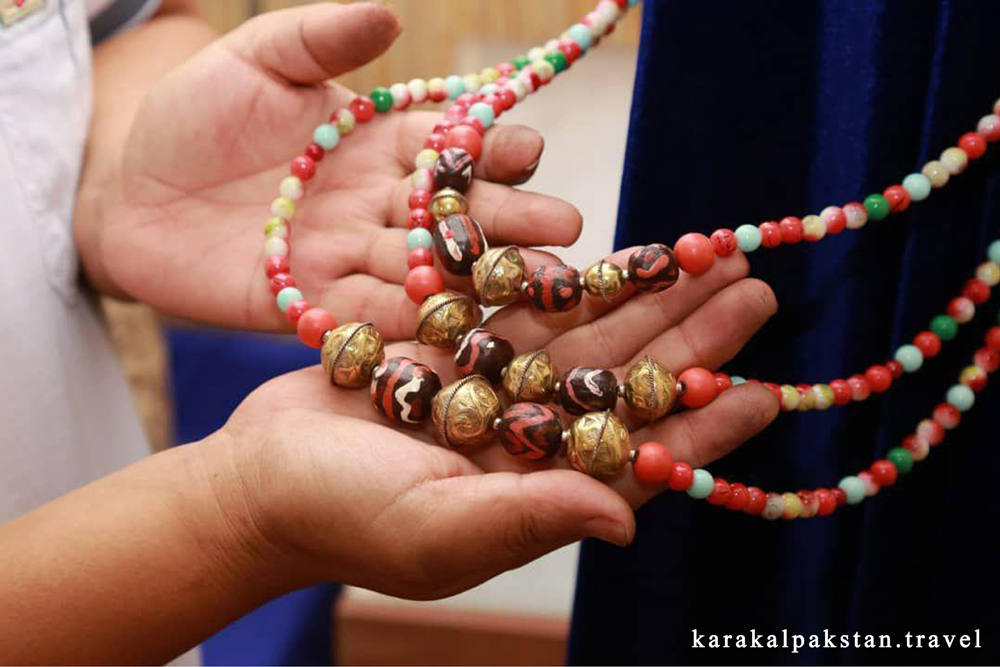