Karakalpaks are a Turkic-speaking nation. Their history has formed throughout the centuries and starts with ancient steppe tribes of the Aral Sea region. Thus, according to S.P. Tolstoy, a famous researcher of Central Asian culture and history, the most ancient ancestors of the Karakalpak nation were Saks and Massagetae tribes (Massagetae of swamps and islands) that inhabited the southern shore of the Aral Sea. They were semi-nomadic tribes engaged in agriculture, fishery and cattle husbandry.

During medieval times the main ethnic core of the Karakalpak nation was the Oguz and Pecheneg tribes. They lived not only in the lower reaches of Amudarya and the Aral Sea shore but also in a much vaster area – from the Aral Sea region to the Volga River. Thereafter their fortunes were connected with the Kipchak tribe that came from the Irtysh region in the XI century. Karakalpaks were part of these tribes» environment before and after the Mongol invasion. Under pressure from the Kipchaks, a part of the Pecheneg nation moved westward and was mentioned in Russian Chronicles as black hats (XII–XIV centuries). The rest of them stayed near the Aral Sea shore and were described in oriental literature as kavmi kulakhisiyakh (a black hats» tribe).

Finally, an important part of Karakalpak ethnic history is related to the post-Mongolian period, when the Golden Horde collapsed. In the XVI–XVII centuries the majority of Karakalpaks lived in the middle and lower reaches of the Sirdarya River, whereas the others settled down in the Amudarya lower reaches after the riverbed changed its course at the end of the XVI century.

By the middle of the XVIII century a portion of Karakalpaks moved to Samarkand, Bukhara and the Fergana Valley regions. At that time the majority of the population inhabited the lower reaches of the Amudarya and Zhanadarya rivers (Southern Aral Sea region). They restored abandoned irrigation channels and constructed new ones, creating blossoming agriculture acreages. Meanwhile, a new type of settlements for tribal coalitions emerged. Thus, every aul (village) had its own fortress (korgan), surrounded by high walls and earth ramparts round the tribal leader’s estate.

The Karakalpak nation was divided into two main branches (aris) – on-tort uru and kongrat that consisted of tribe and clan groups. The most influential groups in the on-tort uru branch (14 tribes) were ktay, kipshak, keneges, and mangit. Aris kongrat included two major tribal coalitions – shulluk and jaungir. Each of these groups was led by a tribal elder (biy) and/or a military leader (batir).

At the beginning of the XIX century Karakalpaks were included into the Khiva Khanate. However, after the Russian Empire conquest of Central Asia, Karakalpak tribes were divided between Turkestan Governorate-General (or “Russian Turkestan”) and the Khiva Khanate (Khodjeyli and Kungrad principalities).

In the 1920s ongoing historical events echoed in the lower reaches of the Amudarya. Thus, a Karakalpak Autonomous Region was established.

When the Republic of Uzbekistan gained its independence in 1991, Karakalpakstan was declared a sovereign republic as part of Uzbekistan the following year. The city of Nukus – the capital of the Republic of Karakalparstan – is located amid the sand areas in the southern part of the modern Amudarya Delta. It is one of the “youngest” Uzbekistan cities. In the IV–III centuries B.C. there was an ancient Shorsh Settlement in the territory of the city.

Today, Karakalpakstan is known as a fastgrowing region with a rich natural and cultural heritage. 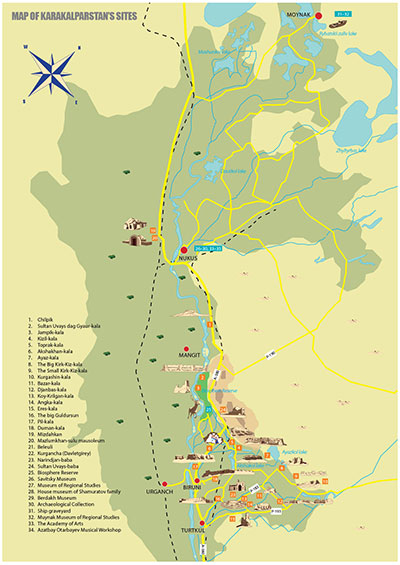 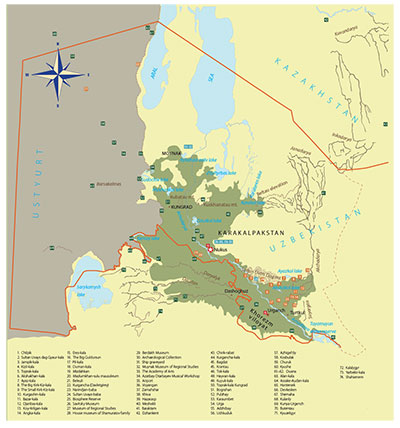