Long ago this city was famous as Gulistan, the garden of flowers. It was a wealthy town surrounded by productive lands and a surplus of water. The king who ruled the city had an attractive daughter by name Guldursun. 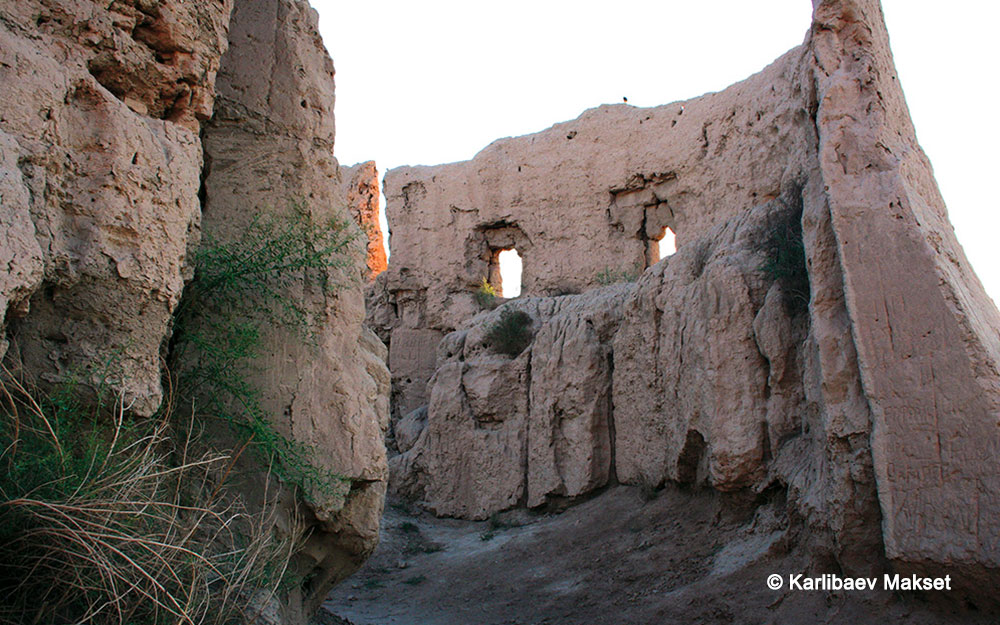 But once a crowd of nomadic Kalmyk invaders came from the steppe and destroyed fields, orchards and channels and surrounded the castle.

Inhabitants of the besieged city waited for several months until they encountered a real danger of starvation. They got together to make a decision what to do next. A man suggested a clever plan. Not only the inhabitants but also the troops who blockaded the castle having destroyed everything around, were starving as well. People took their last cattle, fed it with as much corn as it could eat and then let it go out of the gate to the camp of the Kalmyks. The latter slaughtered the cattle at once in order to eat. They were astonished at the sight of stomach of the animal which was full of grain and thought: “there must be a great amount of food in the city and we are starving here. We must leave everything and be off until we all die of hunger”.

Commanders ordered to take the camp away and cancel the siege. But the king’s daughter Guldursun who watched the Kalmyks behind the walls of the castle for several months fell in love with handsome son of their colonel. Seeing that he was leaving the princess,  defeated by the sense of strong passion sent her servant with a letter: “ Wait one more day and you will see the city surrender”.

The Kalmyks waited another day and at dawn when the city defenders understood that their cunning wiles didn’t work they decided to surrender. The castle was plundered and burnt, its people were taken to slavery.
When the handsome son of the Kalmyk colonel saw Guldursun he said: “If she dared betray her father, her people and hand them to the enemy, then how she will treat me if passion again overcomes her wit?”
He ordered her fastened to the tails of wild stallions so as to tear her body into pieces for treason.

The city turned into ruins from the betrayer’s blood and from those times it became known as Guldursun, not Gulistan. In this case it is possible to presume the legend can be based on reality. In the 17th and 18th  centuries, Kalmyks brought tremendous catastrophes to central Asia. Earlier in the 13th century Guldursun was  mercilessly destroyed by Mongol hordes.